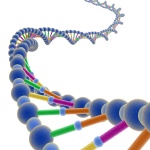 DNA testing is the new frontier of genealogy research, offering opportunities not only to break through those pesky “brick walls” but also to gain a glimpse into our deep histories dating back tens of thousands of years.  With that in mind, we recently decided to give DNA testing a go and have been very pleased with the results.  There are several reputable companies out there today, and we chose Family Tree DNA (FTDNA).  Among the different tests available are the Y-DNA (direct male line), MtDNA (direct female line), and autosomal.  The autosomal in particular is a newer test that looks at the DNA of all ancestors “in-between” the direct male and direct female lines going back as far as 5-6 generations.  In addition to identifying DNA types and where our ancestors came from, the site identifies medium to closely matched individuals, enabling correspondence and the ability to share information. One gracious male member of our Miranda family decided to take all three of these tests, and the results are below.

Y-DNA measures the genetic markers along the direct male line (father’s father’s father’s father, etc).  This test is only available to males.  Our gracious volunteer chose to take the DNA-111 test, which measures 111 chromosomes.  The initial result of the test placed our volunteer within the P312 clade, which according to the FTDNA website “is the most common Y chromosome clade of paternal lineages across Western Europe.”  Outside of the United States, the majority of others who tested positive for P312 are currently located in Central Europe, Spain, France, Portugal, and the British Isles, with smaller numbers in other European nations.  The map below show red dots indicating where other P312s live in Europe.

After receiving the initial results, a Y-DNA genetic cousin who shared 106 of 111 markers contacted us and convinced our volunteer to test further down the P312 family for a relatively new subclade, known as DF99, for which the he tested positive.  As new subclades have been “discovered,” eventually our volunteer tested positive for R-FGC16979, which is still so new that information regarding its origins continue to be gathered.  From reading several community forums discussing R-FGC16979, it appears that the originator of the clade probably lived some 4,500 years ago, which would have been right in the middle of the Bronze Age.  The map of Europe below shows the current location of the few tested R-FGC16979 (red dots), which are located in the United Kingdom and Belgium. R-FGC16979 has already been subdivided into a few other subclades, which have only recently become available.  It is possible that our volunteer could test positive for one of these subclades in the near future.

So how about our personal family results from the Y-DNA test?  Initially the results surprised us because as per oral tradition our earliest known male Miranda ancestor was a full-blooded Yaqui Indian.  Therefore the notion that our direct male line traced back to an area in present-day Belgium was shocking.  The testing therefore was extremely beneficial in helping us direct our research.  The site also matched us up within one genetic marker with several other individuals – being only one genetic marker apart could potentially mean sharing the same direct male line ancestor going back between 6-8 generations.  The first obvious thing about the results was that all our volunteer’s genetic matches shared the same last name – Fimbres.  This was initially shocking because no member of our family had ever heard of the surname Fimbres before the test!  And yet, the results helped explain why we had hit a “brick wall” in tracing the Miranda line further back than we already had and has helped direct our research in a new direction in consultation with our new genetic cousins.  As such the Y-111 DNA test was instrumental in moving our research forward in a new and exciting way.

The MtDNA exam measures the genetic markers along the direct female line (mother’s mother’s mother’s mother, etc).  This test is available to both females and males.  The results of the test placed our volunteer in the A2-C64T haplogroup, which is one of the main Native American haplogroups.  According to the FTDNA website, “Haplogroup A is found in eastern Eurasia and throughout the Americas. This haplogroup was present in the populations that initially colonized the pre-Columbian Americas, and dates to at least 30,000 years ago.”  This result did not really surprise us.  Many Latin Americans have maternal Native American genes as the initial Spanish settlers were almost entirely men who later mated with Native American females, resulting in the large Mestizo population that currently exists in much of the Americas.  So far there has only been one match found that shares a similar result.  See below for a map that traces the migration of the A haplogroup from Siberia, through North and eventually into South America over a 30,000 year period. 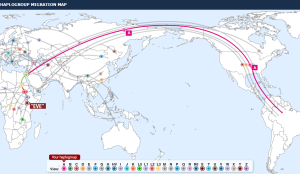 Migration of “A” Haplogroup

The autosomal DNA test was one of the newer DNA tests available back in 2012, testing autosomal DNA inherited from both the mother and father going back approximately 5-6 generations including everyone “in-between” the direct male and direct female lines.  For most, the most fascinating thing about the autosomal results is that it provides an individual ethnic percentage breakdown.  The original results were caveated by the testing company noting that results would continue to be refined as more people tested.  In 2012 our volunteer originally tested 55% European, 27% New World, and 18% North African.  An update in 2014 modified those results to 65% European, 26% New World, and smaller percentages of African and Asian.  The latest April 2017 results updated the results even further as per the below:

The results are largely consistent with many Latin Americans, demonstrating the strong mixtures of European (primarily from the Iberian peninsula) and New World indigenous populations.  Our volunteer’s results have certainly changed:  gone is the significant North African blood, replaced by Ashkenazi Jewish and sub-Saharan African markers.  In a way these updates have been reassuring as they confirm findings based on paper records, particularly the Ashkenazi markers and their primary location in Poland, where we believe our Sprinz ancestor originated.

In short, we have found that DNA testing has been very helpful in breaking down some of our research “brick walls,” teaching us about our ethnic breakdown, and connecting us to more distant genetic cousins!