Our Despatie family has a long history in Quebec, Canada dating from the mid 1600s and lasting some 250 years until the 1890s, when the first Despatie in our line moved permanently to the United States.

According to some sources I have found, the Despatie name and its various spellings (Despatis, Despathy, Despaty, Depatie) was invented in Canada and therefore would not actually trace back to France.  This research notes that our line originally carried only the last name Forget, and the coat of arms at left is for this name.  The origins of Forget come from the Old French word ‘forge,’ which indirectly denoted a person working as a blacksmith.  One theory I have heard is that there were two early families in Quebec with the last name Forget, and one of our ancestors added ‘Despatie’ to distinguish our line from the other Forget family.  In contrast, a Despatie cousin (thanks Guy!) notes that ‘Despatie’ does in fact come from France.  The explanation is that the original spelling was Des Patis (a ‘Patis’ is a poor pasture) and that the original last name of our immigrant ancestor was Forget dit Des Patis, which is loosely translated as (blacksmith from the poor pastures).  The marriage record below for Generation 1 – Nicolas – includes “dit Despatie” after Forget.  Somewhat confusingly, some records I have located carry only Forget, while others carry Forget dit Despatie, and by the ninth generation, Forget is dropped altogether.

Our line from the arrival of the first generation until my grandmother goes like this:  Nicolas-Jean Baptiste-Michel-Michel-Michel-Louis-Antoine-Antoine-Emery-Loretta.

Below are two maps that document the migration of our Forget-Despatie line, over 10 generations, from metropolitan Montreal, Quebec to Wauregan, Connecticut.

Our direct line ancestors are highlighted below in red text.

The progenitor of our line in the New World was Nicolas Forget dit Despatie, who was born in the Basilica of Notre Dame in the town of Alençon, Orne Department in the Lower Normandy region of France.  He appears to have been born around 1620, based on his listed age in the 1666 Quebec Census.  While it is still unclear exactly when Nicolas arrived in New France, a good bet would be around 1650, before his marriage to Madeleine Martin.  There are several sources which claim that Nicolas was a well-known fur trader.  The book, The Scalp Hunters:  Abenaki Ambush at Lovewell Pond by Alfred E. Kayworth and Raymond G. Potvin includes the following quote,

“In 1654 Governor Jean de Lauson allowed two intrepid young Frenchmen to go into the Pays d’en Haut with some Ottawa tribesmen on a fur trading run.  One of them was Medard Schouart des Groseilliers and the other was named Nicolas Forget alias Desptatis (Forget).  Groseilliers later gained fame from the adventures that spurred him to found the Hudson Bay Company.  When Groseilliers and Forget returned to Quebec in August 1654 with 50 canoes filled with furs, the arrival of the flotilla set off a great celebration in Quebec.  They were saluted by a great salvo of cannon fire, and the general populace hailed them as heroes.”

Nicolas married Madeleine Martin on February 3, 1653 in Quebec, Canada.  Madeleine was the daughter of Abraham Martin “the Scotsman” (although most sources agree he was not likely from Scottish parentage) and Marguerite Langlois.  The Plains of Abraham, where a famous battle between the French and English occurred in 1759 is named for Abraham Martin, who owned the land near the fields where the park now stands in the early years of New France.  Many sources cite the friendship between Abraham and Samuel de Champlain, the “Father of New France” who likely gave Abraham the land.  The record also names Nicolas’s parents as Paul Forget dis Despatie and Nicole Chevalier.

Nicolas and Madeleine had the following children:

Michel, born about 1656 in Montreal, Quebec;

Thus far, we have not been able to locate much additional information from the latter part of Nicolas’s life.  According to his church death record, Nicolas died on April 16, 1690 in Repentigny, an off-island suburb to the north of Montreal in the province of Quebec.  The record notes that he was “more than 60 years old.” 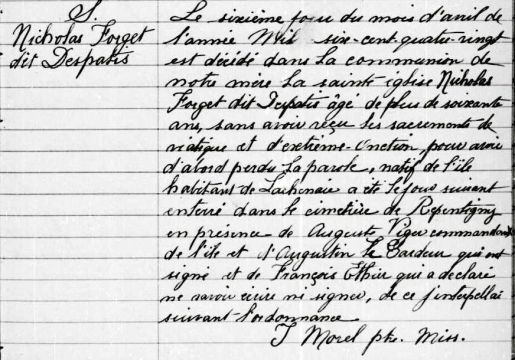 Jean-Baptiste was born around 1677 in Lachenaie, Quebec, and has the distinction of being the first of our line to be born in New France (Canada).  According to his wedding record, he married Jeanne Beaudoin in Lachenaie on November 22, 1700.  Jeanne was the daughter of Jean Beaudoin and Charlotte Chauvin and was about 18 years old at the time of her marriage.  It is also noted that at the time of the wedding, Jean’s mother Madeleine already was deceased.

Jean-Baptiste and Jeanne had 17 children, of which the following ten children survived to adulthood:

Much like the case of his father, Nicolas, we have been unable to locate additional information regarding the adult life of Jean-Baptiste.  He died on August 13, 1733 in Lachenaie.

Michel was born on March 29, 1705 in the Lachenaie suburb of Montreal.  According to his wedding record, he married Marie-Madeleine Migneron on January 17, 1735 in Lachenaie.  Marie-Madeleine was the daughter of Pierre Migneron and Marie-Anne Charron.

Michel and Marie-Madeleine had 8 children together:

A death record for Michel has not been located.

Michel II was born on March 29, 1737 in the Lachenaie suburb of Montreal.  According to his wedding record, he married Angelique Berloin-Nantel on July 13, 1762 in Terrebonne.  Angelique was the daughter of Jean-Baptiste Berloin Nantel and Francoise Renaud.

Michel and Angelique had the following children together:

Michel III was born on February 11, 1765 in the Terrebone suburb of Montreal.  He married Marie Renaud on November 20, 1786 in Terrebone.  Marie was the daughter of Antoine Renaud and Josette Lamoureux.  Marie and Michel had the following children together:

Louis was born in 1791 in the St. Therese suburb of Montreal.  According to his wedding record, he married Angelique Sauriol-Sansoucy on Jan 15, 1815 in St. Rose, Ile Jesus, Quebec.  Angelique was the daughter of Pierre Sauriol-Sansoucy and Marie-Angelique Desjardins.

They had the following children together:

Louis died on October 11, 1832 in St. Therese, Montreal at the young age of 41, although a death record has not been located.

Antoine was born on April 8, 1822 in Ste-Therese, Montreal.  According to his wedding record, he married Genevieve Forget in St. Therese on July 29, 1844.  Genevieve was the daughter of Charles Forget and Marie Belisle.  Antoine and Genevieve were 3rd cousins, once removed:  they share direct common ancestors in Jean-Baptiste Forget and Jeanne Beaudoin, who were Antoine’s GG grandparents and Genevieve’s GGG grandparents.

Antoine and Genevieve had the following children together:

Antoine and Genevieve appear together in the 1861 Census of Canada, living in Shefford, Quebec (about half way between Montreal and Sherbrooke) with several of their children.  They also appear in the 1871 and 1881 Censuses of Canada.  In each census he is listed as being a farmer.  According to his death record, Antoine died on April 23, 1902 in Roxton Pond.  So far, no death record has been located for Genevieve.

Antoine II was born on June 6, 1845 in St. Therese, Montreal.  Antoine was the last of our line to be born in the city of Montreal.  According to his wedding record, he married Celina Plouf in Ste. Cecile Milton on July 29, 1869.  Celina was the daughter of Pierre Plouffe and Therese Henau.

Antoine and Celina had the following children together:

Antoine, Celina, and three children appear in the 1881 Canadian Census.  The family is living in Granby, Quebec, where Antoine worked as a farmer.  Although we have not located an exact date, Antoine likely moved from Canada to the United States between 1890 and 1893, becoming the first of our Forget-Despatie line to move permanently to the United States.  This is based on the fact that he does not appear in the 1891 Canadian Census and because his wife Celina died in Wauregan, Connecticut on February 15, 1893.

Antoine died in Plainfield on January 19, 1920 and is buried at the Sacred Heart Church Cemetery in Brooklyn, Connecticut.

Emery was born in Granby, Quebec on December 21, 1877.  In the 1881 Canadian Census (see above), Emery is listed living with his parents, Antoine and Celina, in Ste. Cecile Milton near Roxton Pond.  Per his naturalization certificate, he moved from Canada to the United States with his parents in September 1886, arriving by railroad to the village of Natick, Rhode Island near Warwick.  In the 1900 US Census (see above), Emery was living with his father Antoine and several siblings at 27 N. Walnut Street in Plainfield, Connecticut, where he worked as a weaver.  On February 27, 1905, Emery married Marie Leonide Laura Bernier in Granby, Canada.  Laura was the daughter of Julien Bernier and Hermine Ravenelle.

Emery and Laura had the following children together:

In the 1910 US Census, Emery, wife Laura, children Dorothy and Antonio, and 25-year old sister Leonie Tonille were living in Plainfield (Wauregan Village) on N. Walnut Street.  Emery worked as a weaver at the cotton mill.  On September 12, 1918, Emery registered for the World War I draft in Willimantic, Connecticut.  The draft registration card (at right) denotes that Emery was a declared alien from Canada, was of medium height and build, and had gray eyes and gray hair.

On May 12, 1920, at the age of 43 (and after having lived in the United States for some 30 years, Emery became a U.S. citizen.  In both the 1920 US Census and in the 1921 Danielson City Directory, Emery and family still lived in Plainfield (Wauregan Village) on 11 N. Walnut Street, and Emery continued to work as a weaver at the cotton mill.  In the 1927 and 1928 Danielson City Directories, Emery is listed as working as a weaver and living with wife Laura, son Antonio, and daughter Dorothy at 4 Griffiths. 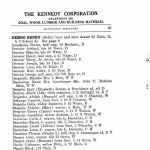 In the 1930 US Census,  Emery and family lived in Killingly (Danielson borough), where Emery worked as a curtain maker at the cotton mill.  His son Antonio worked as a taxi driver, and his three daughters were also curtain makers at the cotton mill.  By the time of the 1940 US Census, Emery appears to have retired from working in the mill.  Of his children, only Dorothy remained living in the house, and she was employed as a clerk for a retail store.  Of note, Laura’s brother Anselme Bernier was living with the family and also worked as a clerk at the retail store.  Laura died on February 18, 1948 in Wauregan.  Following her death, Emery was listed in the 1948 and 1954 Danielson City Directories living at 18 Leander Street.

Emery died on October 19, 1956 in Killingly, Connecticut, although a death record has not yet been located.  He is buried at the Sacred Heart Church Cemetery in Brooklyn, Connecticut.  His gravestone inscription reads s/o Antoine & Celina (Plouffe).

Loretta was born on June 3, 1913 in Wauregan, Connecticut.  She is the first of our Forget-Despatie line to be born in the United States and was the youngest of four children.  As the child of Québécois people, Loretta and her siblings were raised speaking French at home and learned English in school.  As such, Loretta was entirely bilingual.

Loretta attended school up to early high school, but left around the age of 15/16 to work in the mills.  In the 1930 census, she is listed as being employed as a curtain maker in the cotton mill.